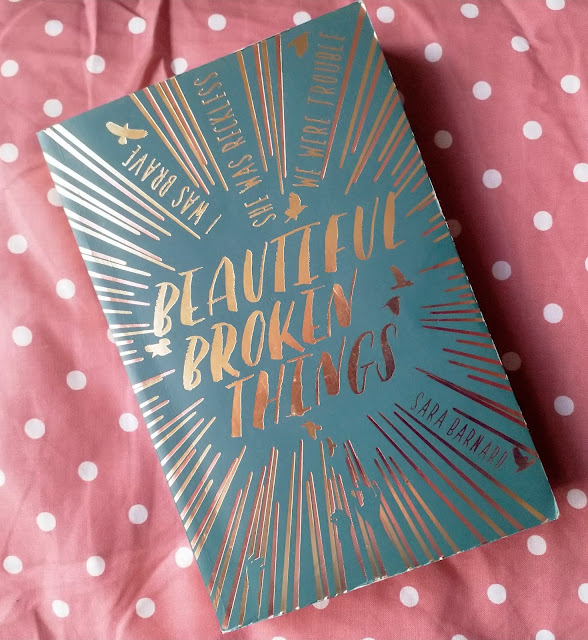 “I was brave
She was reckless
We were trouble

Best friends Caddy and Rosie are inseparable. Their differences have brought them closer, but as she turns sixteen Caddy begins to wish she could be a bit more like Rosie – confident, funny and interesting. Then Suzanne comes into their lives: beautiful, damaged, exciting and mysterious, and things get a whole lot more complicated. As Suzanne’s past is revealed and her present begins to unravel, Caddy begins to see how much fun a little trouble can be. But the course of both friendship and recovery is rougher than either girl realizes, and Caddy is about to learn that downward spirals have a momentum of their own.”

This story is told from Caddy’s perspective, a 16-year-old girl with a stable life. Her parents both have successful carers and she goes to a private all-girls school.  She is desperate for a significant life event and a boyfriend. At first, this put more off, not another young adult book focusing on getting the boy. Thankfully I was wrong.

Rosie, Caddy’s best friend of 10 years goes to normal school in Brighton and is more assertive than Caddy. They text each other during the day which is printed in the book helping to break up the story making it an easy read. The texts continue throughout and help to bring a sense of reality to the character.

Suzanne moved to Brighton from Reading and joins Rosie’s school. They quickly become friends. Rosie invites Caddy to meet Suzanne. Caddy feels instantly jealous of Suzanne and Rosie’s developing friendship. Something I think we can all relate too. As a teenager friendships are so important and with everyone’s emotions being heightened, we often don’t handle them in the same way friendships are as an adult.

Caddy is suspicious of Suzanne, as she doesn’t talk much if at all about her previous life in Reading. Caddy stalks Suzanne on Facebook and by being manipulative (I didn’t particularly like Caddy at this point but we have all made mistakes as a teenager). She finds out Suzanne was abused as a child by her Dad.

Slowly there is a change in dynamics in the friendship group, Caddy and Suzane become closer probably, partly because Caddy felt guilty about her behaviour.  Caddy’s protective nature becomes stronger when she finds out Suzane suffers mental health issue from the abuse. Suzane behaviour begins to change for the worse and Caddy’s parents and Rosie does not want her to see Suzanne anymore.

The story then takes a dramatic and sudden turn of events. I won’t spoil it for you! The ending though is beautifully simple.

The character depth in this book for Caddy and Suzanne, in particular, is gripping and gently woven into the story. For me, the book takes me back to being a teenager when you feel everything so deeply and friendships are your whole world.

I would love to hear your thoughts if you have also read this book.